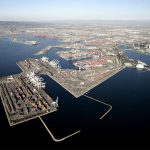 The Commission held its February public meeting in Long Beach, where the City holds sovereign tide and submerged lands in trust for the people of California.

The Commission oversees the City’s management of its trust grant. After the Executive Officer’s report, Mark Gold, Executive Director of the Ocean Protection Council and Deputy Secretary for Ocean and Coastal Policy at the Natural Resources Agency, spoke to the Commission about the Ocean protection Council’s new strategic plan, its bold sea level rise preparedness goals, and the value of its collaborative relationship with the State Lands Commission.

The Commission was briefed about the development of its 2021-2025 strategic plan and received public comment about what to include and prioritize in the plan. Commenters encouraged the new strategic plan to facilitate California’s clean energy goals, prioritize environmental justice concerns, such as adequate open space and equitable public access, and to leverage partnerships to ameliorate pollution from the logistics industry. Aquaculture, offshore wind energy, and improved inland and coastal water access were other key issues expressed during public comment. The Commission is hiring a consultant to guide the development of its new strategic plan. Our goal is to have a consultant by mid-March and to circulate a draft plan for public comment by summer 2020.

Legislative Analyst’s Office (LAO) staff briefed the Commission on a report it published in December 2018 called “Preparing for Rising Seas; How the State Can Help Support Local Coastal Adaptation Efforts.” LAO staff spoke to the Commission about ways the state can help support local coastal adaptation efforts and can be more proactive and less reactive. LAO staff also elaborated on challenges and opportunities for cross-jurisdictional collaboration. LAO staff noted that while the occasional “far off in the future” sense of sea level rise means that it sometimes isn’t at the top of the list of local priorities, especially when juxtaposed against pressing issues like homelessness and affordable housing.

Commission staff briefed the Commission on its efforts to build resiliency for granted public trust lands and provided a progress report on its AB 691 (Muratsuchi, 2013) implementation. Staff outlined the vulnerability assessment review process and highlighted the diversity of uses on public trust lands that are vulnerable to sea-level rise. Staff also outlined implementation challenges, which are comprehensively discussed in the staff report. One overarching issue affecting vulnerability assessments is that, because the public trust boundary is ambulatory, the boundary between public and private land will shift landward in most areas as the sea level rises.

The Ports of Long Beach and Los Angeles updated the Commission on the San Pedro Bay Ports Clean Air Action Plan and their progress to date. The Ports spoke about their clean trucks program and partnerships to advance technology. Establishing a clean truck fund rate is a current key goal. Vessel speed reduction programs were also highlighted. Other incentive approaches focus on getting ships with the cleanest engines to call at the ports voluntarily. Low sulfur fuel and shore power are other approaches the ports are leveraging to reduce emissions. The metrics the ports will use to achieve its goals were another discussion point, as well as ways to demonstrate stakeholder engagement among affected communities concerning air pollution. The Commission encouraged the ports to use available pathways to elevate these issues for public awareness and to use the Commission as a resource to pursue appropriate state responses to address air quality concerns.

The Commission adopted a support position on a pair of federal bills (H.R. 5390 and S. 2166) that would formally authorize regional ocean partnerships as partners with the federal government and provide partnerships with more consistent funding. Regional ocean partnerships are organizations that state governors voluntarily convene to address ocean and coastal issues of concern in a region. There are four existing partnerships, including the West Coast Ocean Alliance of California, Oregon, and Washington. The State Lands Commission and the Ocean Protection Council are the state agency co-leads for California. The Commission voted to sponsor state legislation to repeal obsolete and redundant school land statutes and modernize other school land statutes. School lands are lands Congress granted to California in 1853 to support public schools. They consist of the 16th and 36th sections of land in each township. The Commission also voted to sponsor state legislation to address the state’s unfunded liability for the future abandonment of the West Wilmington and Long Beach Unit oil operations in the City of Long Beach. The legislation, AB 2687 (O’Donnell), would remove the cap in the Oil Trust Fund, resuming monthly deposits of $2 million a month from Long Beach oil operation revenues until the Trust Fund reaches a balance that will cover the state’s contractual liabilities.

The Commission authorized its Executive Officer to secure the services of an engineering consultant firm to plug and abandon legacy wells located at or near Summerland Beach in Santa Barbara. This action, part of the Commission’s implementation of SB 44 (Jackson, 2017), is intended to stop oil releases from up to eight legacy wells in the Summerland area.

The Commission’s next meeting will be on April 29th in the northeastern region of California.