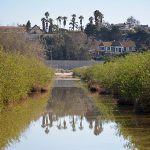 Sacramento, Calif. – The State Lands Commission sent a letter to the U.S. EPA today stating that immediate action is needed to stop the flow of 50 million gallons per day of polluted water into the Tijuana River Valley. The flow is resulting in prolonged beach closures in Imperial Beach and Coronado.

“The State Lands Commission is deeply concerned about the latest flows of untreated wastewater into the Tijuana River and the impacts of this pollution on community health and public lands,” said State Controller and State Lands Commission Chair Betty T. Yee. “It is imperative the U.S. EPA collaborate with the Mexican government and International Border and Water Commission to prevent ongoing cross-border pollution and bring a swift end to this crisis.”

“The U.S. EPA must provide leadership at this critical moment. The U.S. section of the Tijuana River Valley must be restored so that the health and safety of California’s residents, visitors, wildlife, and natural resources are no longer threatened,” adds the Lieutenant Governor and State Lands Commissioner Eleni Kounalakis.

The Commission’s letter emphasizes that impairment of the public’s right to access the ocean is unacceptable and cannot continue for such a long time. The letter also points out that the current crisis is a lamentable, yet dramatic, reminder of the need for additional infrastructure on the U.S. side of the border. Last year, the Commission, together with a coalition of local and state governments and stakeholder groups, adopted a resolution identifying critical infrastructure projects and urging the federal government to act. The U.S. EPA must prioritize these infrastructure projects to protect the American public from future emergencies.

The Commission manages state sovereign land, including land in the Pacific Ocean and Tijuana River Valley, on behalf of the statewide public, and leases that land for uses consistent with the Public Trust Doctrine. The Commission and its lessees have a duty to preserve and manage these lands for the benefit of the statewide public.  The constant flow of pollution crossing the border from Mexico critically impairs the management and use of these lands by the people of California. A copy of the Commission’s letter can be accessed here.