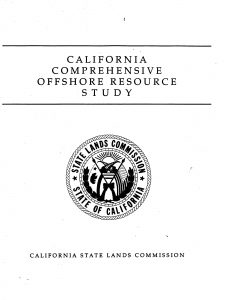 The California Comprehensive Offshore Resource Study (CCORS) was initiated by the Commission in 1987. At that time, the Commission was deliberating a development proposal to install up to three new oil platforms on five offshore oil exploration and development leases under its jurisdiction near Coal Oil Point in Santa Barbara County. As the Commissioners evaluated this proposal, they became concerned that there was no centralized information source for all of California’s coastal resources which could be used to measure the statewide implications of any new coastal development. The CCORS project was developed to address this concern.