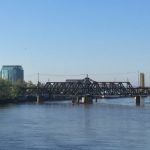 The Commission held its June 2021 meeting virtually. The staff reports and comment letters associated with our meeting are available in our Archives. The Executive Officer’s report with updates and links to supplementary materials for a wide array of activities and projects is also available. Of particular note are updates about significant oil and gas decommissioning projects in the Santa Barbara Channel and a recent Hollister Ranch Public Access Program meeting.

Staff updated the Commission about natural resources and public land management-related legislation involving offshore wind energy, plastic pollution, climate change, and sea-level rise preparedness. The Commission adopted a support position on SB 796 (Bradford) that would authorize Los Angeles County to sell, transfer, or encumber Bruce’s Beach, a portion of land within Manhattan State Beach, under terms and conditions that the Los Angeles County Board of Supervisors determines are in the best interest of the county and the public. Bruce’s Beach was a Black-owned resort that opened in 1912, and in 1924, was dispossessed by the City of Manhattan Beach through eminent domain.  LA County, which owns the land, is seeking to transfer it to the Bruce family descendants. But to make that happen, California must pass a bill to change the deed restrictions on the property. SB 796 would allow LA County to deed Bruce’s Beach back to the Bruce family. This is an effort to right a wrong that occurred a century ago and is connected with broader conversations in California and the nation about racial injustices and reparations.

The Commission authorized staff to engage in discussions with Congress about amendments to the federal Vessel Incidental Discharge Act to improve states’ access to vessel discharge data and to address impacts to the Marine Invasive Species Control Fund. Vessel discharge data information is important because it can help inform a petition to the US EPA to strengthen the federal ballast water discharge standards if the data support that conclusion. Stricter ballast water discharge standards would help protect California waters from the introduction of non-indigenous, invasive species. Addressing impacts to the Marine Invasive Species Control Fund is important because it will ensure that fee collection is sufficient to support state programs, including the one the Commission manages, to inspect vessels and enforce the Vessel Incidental Discharge Act provisions.

Opposition to Oil and Gas Leasing in Federal Waters

The Commission voted to support the West Coast Ocean Protection Act by Senator Feinstein and the California Clean Coast Act by Representative Carbajal, legislation that would permanently ban offshore drilling on the Outer Continental Shelf off the coast of California, Oregon, and Washington. The Commission also voted to support the American Coasts and Oceans Protection Act by Representative Levin that would ban offshore oil and gas drilling in Southern California. This action reinforces the Commission’s commitment to transitioning to a clean energy future and re-memorializes its opposition to new offshore oil and gas development in federal waters.

The Commission issued two leases to the Central Valley Flood Protection Board for levee protections in Sacramento County to protect public safety and the region’s water conveyance system by ensuring the integrity of the regional levee system, while reestablishing native vegetation along portions of the American River Parkway.

The Commission’s next public meeting will be on August 25, 2021. You can sign up here to receive updates about this and future meetings. Another great way to stay informed is by following the State Lands Commission on Twitter.