Removal and disposal of ASR-85, All American, from the Sacramento River

On August 3, the Commission’s contractor demolished a derelict vessel called the All American. The All American was a former military Air-Sea Rescue (ASR or “crash boat”) 85-foot vessel that had been privately owned for many years. A homeowner brought the All American to his dock on the Sacramento River just north of the I-80 bridge, towing another large vessel from Antioch. The river at this location is state-owned public trust land. On June 21, 2022, the vessel burned at the dock. Fire crews responded and extinguished the fire after cutting holes into the hull of the vessel. The US EPA and California Department of Fish and Wildlife, Office of Spill Prevention and Response, then removed most fuel and oil from the vessel.

The vessel in its compromised condition was at threat of breaking apart and releasing residual petroleum, hazardous waste, and debris into the river. No private party was identified as both responsible and able to timely remove this threat. Sacramento County, therefore, requested the Commission’s assistance to complete the removal and disposal of the All American. Commission staff declared the vessel an emergency, entered into a contract for removal and disposal, and coordinated the disposal of loose hazardous waste by the California Department of Toxic Substances Control (DTSC). On July 28, DTSC recovered marine batteries, solvents, lubricants, aerosols, and other waste.

The demolition work involved using a hard boom to enclose the entire site. Then a barge-mounted excavator grabbed pieces of the vessel from the water and deposited the debris onto the barge. Crews captured residual petroleum product released from the top of the water with absorbent pads and small, loose debris. The waste will be trucked to a landfill for proper disposal. 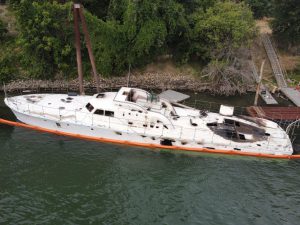 The ASR-85, All American, a former military vessel removed from the Sacramento River and disposed of. Photo courtesy of the Sacramento Sheriff Department. Larger view.